The Mystery of the Cherubim 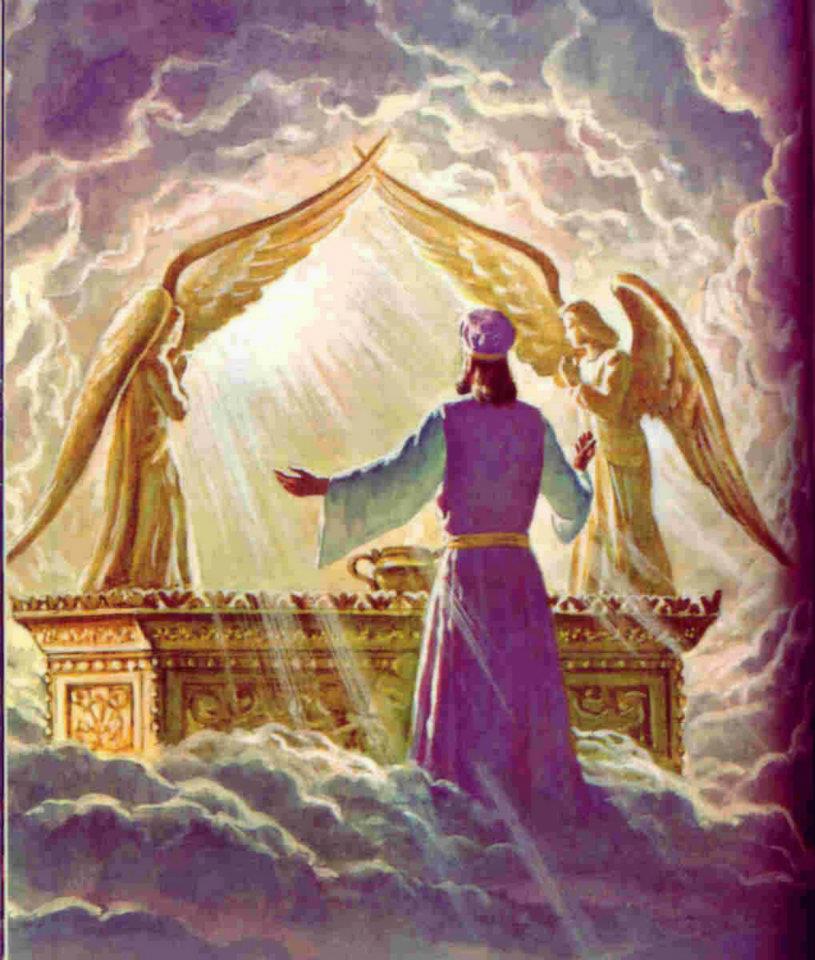 God has something to reveal to us about the Cherubim that will enable us to enter into the very presence of God…into the Holy of Holies in these end times. Along with his presence, we will find healing for our soul. God will take away our brokenness and make us whole, but it is a process that requires our cooperation. The process is necessary so we will deepen our relationship with God.

It is time for the church to enter into the Holy of Holies. We need to be living continually in the manifest presence of God. He will be our safe place, our provider and our healer in the difficult days that lie ahead. We don’t have to wait for him to do something. He has already done it and is waiting for us to come into his waiting arms, but how do we do this? Our answer lies in the mystery of the cherubim.

The first thing I want to do is establish a biblical foundation upon which the revelation of the cherubim is founded. The writer of Hebrews states regarding the furnishing of the Holy of Holies, that there were “the golden censer, and the ark of the covenant overlaid round about with gold, wherein was the golden pot that had manna, and Aaron’s rod that budded, and the tables of the covenant; And over it the cherubims of glory shadowing the mercyseat; of which we cannot now speak particularly” (Heb. 9:4, 5).

The words in this passage, “of which we cannot now speak particularly” are, I believe, an indication that God has a message for us regarding the cherubim over the mercy seat that was not to be known by Christians of earlier eras. It is something reserved for the church of the end times. We are the ones who need this revelation so that we can fully enter into the presence and power of Almighty God, the Lord Jesus Christ, our Savior and Lord who is longing for us to come into full maturity even more than we long to be there.

If we are to ascertain the great truth to which the above Hebrews passage refers, we must learn all we can about the cherubim that are over the mercy seat on the ark. We know that in addition to being over the mercy seat, they were embroidered on the fabric of the veil and the hanging curtains of the tabernacle. They were also used in ornamenting Solomon’s temple. What are cherubim? Most people believe they are angels; however, a thorough search of them throughout the entire Bible might show something else when viewed as a spiritual type of something inward rather than outward. Nowhere are they actually said to be angels. The Hebrew definition for cherubim is “an imaginary figure.” Here is our first clue. They have something to do with the holy imagination.

They are described as having wings, but the passages in which wings are mentioned are highly symbolic. The wings are symbolic of the imagination. This is explained in great detail in my book The Four Living Creatures. “The wings of a bird enable it to fly–to soar high above the earth where it can see from an elevated position and escape dangers that would otherwise destroy it. Human beings also have wings–the wings of the imagination. Our imagination can transport us in our mind any place we want to be. It is a gift from God that enables us to transcend the mundane and soar into new heavenly dimensions with Christ.”

Let’s look at one of the scriptures regarding their appearance on the curtains of the tabernacle (Exo 26:1). “Moreover thou shalt make the tabernacle with ten curtains of fine twined linen, and blue, and purple, and scarlet: with cherubim of cunning work shalt thou make them.” What is the “cunning” work of which they were to be made? In Hebrew, the word “cunning” means “to plait or interpenetrate, i.e. to weave, to fabricate, to plot or contrive, hence, (from the mental effort) to think, regard, value.” It is sometimes translated “imagine.” My New Strong’s Expanded Exhaustive Concordance of the Bible states regarding the word cunning, “Generally this root signifies a mental process whereby some course is planned or conceived. It means ‘to think, to account, to reckon, to devise, to plan.’”

Our Exodus scripture states these cherubim were made of cunning work. Now we can see they were first conceived of in the mind…in the imagination. The people who were involved in the work of building the tabernacle and its furnishings had never seen a cherub. They had to imagine what they looked like. Would God allow something that was just made up in men’s imaginations to so conspicuously adorn the tabernacle made according to God’s specific plan revealed from heaven? The answer is, Yes, because in the imagination, the holy imagination of redeemed persons, the creative Spirit of God met with them and showed them the likeness they were to make. It is with our imagination that we see into heaven. The people were not seeing something of earth. They were seeing something from heaven. Their imaginations were able to see what God was showing them from his creative mind…his great and holy imagination.

As stated earlier, people have assumed that the cherubim are angels, but the Bible doesn’t actually state this. Chapter ten of Ezekiel is a whole chapter devoted to the cherubim . Here Ezekiel states that the cherubim are actually the four living creatures which are the described in detail in Ezekiel 1.  In my book The Four Living Creatures I reveal in detail that the four living creatures are actually Christians living in the end times who come into the fullness of Christ and minister in his power and love to a lost and dying world. There are not just four of them. Four spiritually means “persons in relation to earth as created.” (E.W. Bullinger) If we take numbers literally in enigmatic scripture passages we’ll never ascertain the deep spiritual meaning in the passage. Ezekiel 1 describes the process we will go through to come into perfection in the end times. This message was hidden in symbolism because only the church of the end times would be able to enter into this. No matter hard dark things in this world look, we as Christians are greatly blessed to be alive at this time because we will be able to enter into Christ’s fullness beyond anything possible in ages past.

As the writer of Hebrews states in Hebrews 6, we need to move beyond the elementary basics of the faith and press on into the deep things of God. Of course we need this foundation, but most often rather than moving on in God, we get stuck going over and over the same old thing while our hearts are yearning for something deeper.

People have feared using the imagination because the first references to the imagination in Scripture refer to it as being evil. This is only because evil people have an evil imagination. Righteous people have a holy imagination. We all use our imagination whether we want to or not because it is part of every person’s mind. David prayed the following before the people as he charged Solomon with the building of the temple. “O Lord God of Abraham, Isaac and Israel, our fathers, keep this forever in the imagination of the thoughts of the heart of thy people, and prepare their heart unto thee.” Here the imagination has to do with the preparation of the heart. As they looked at the elements gathered for the construction of the building, they were to imagine what it would look like when it was completed. Today we are building a temple for God…the temple of our life so that we can be his dwelling place on earth. We need to imagine what we will be like when we are perfected. We need to see our self in relationship with Jesus, the one who is perfecting us. (I will give more specifics on this later as we see how it applies to inner healing for dissociated parts. I am just laying a biblical foundation here.)

Another place where we see the cherubim is in Genesis 3:24. When Adam and Eve sinned and were cast out of the Garden of Eden, God “placed at the east of the garden of Eden cherubim and a flaming sword which turned every way, to keep the way of the tree of life.” The flaming sword and the cherubim ensured that no one could go back into the paradise of Eden and eat from the tree of life and live forever while in a sinful state. The Garden of Eden is not a geographical location on earth today where there is a literal flaming sword and cherubim. This is symbolic of a spiritual dimension. The garden represents a spiritual place in our heart where we can commune with God. However, we are limited in our ability to experience God because of two things represented symbolically by the flaming sword and the cherubim. The sword represents dissociation (see my article on this web site entitled “Dissociation and the Flaming Sword”) and the cherubim are a type of our imagination.

The word “flaming” in Hebrew is lahat meaning “enwrapping and magic (as covert).” When we were hurt as children, we cut away (sword) from our true self and magically enwrapped our self in a false persona by using our imagination. This was done covertly inside the soul where no one could see what was happening.

The cherubim are symbolic of our imagination. In order to once again enter into the paradise of God, we must pass through our holy imagination. We used our imagination when we dissociated and we must use our imagination again to become whole. No one can enter back into the paradise of God in a dissociated state. We must all be whole persons…we must come into the wholeness of the Lord Jesus Christ. In some form or other, all humans are split to a certain degree in their soul. I am not speaking here of full-blown personalities but of the loss of our ability to be in touch with and live out of our true self. The Bible has too much to say about dissociation for this not to be part of the human experience. (See my Daniel series on this site.) Jesus was the only whole person. We, as Christians, are on a journey towards wholeness.